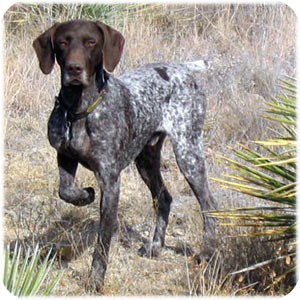 When I was 14 years old my Dad got on a lease in Three Rivers, Texas. This was classic South Texas hunting... big bucks, rattlesnakes, and quail everywhere. It was not uncommon to shoot 10 limits of quail a day all over a pair of unbroke Brittany's.

For me at 14 I blamed the dogs busting coveys on poor breeding. I thought they just didn't have what it took, and that for a quality dog steadiness should come naturally. And so without internet in the 1970's my limited amount of research led me to believe that a good upland game bird dog needed to come from a "field champion," even though at that point I had no idea what a field champion was. And it was at that point that I wanted to have myself a field champion.

Time passed, my dad bought me a dog that turned out to not hunt very well. Not because of breeding, but because I had no idea what I was doing as a trainer. Then in my 20's a friend of mine gave me a German Shorthaired Pointer. I had never heard of the bread, but he assured me the dog was professionally trained and "broke." I pretended to know that I knew what broke was, and promptly took the dog hunting.

There in South Texas the dog's liver and rhone coloring seemed to disappear in the mesquite brush. And it was on our first hunting trip that I learned what "broke" meant. It meant that dog would not leave point until you told him to. And it meant flawless snappy retrieves when the birds fell. I found out having lost my dog for over an hour to find him steady on point for the first covey of quail of the season. I was hooked... I had me a hunting dog.

We killed hundreds of quail together before Greta died tragically. And with her passing I decided to try my luck with a yellow lab changing game altogether. It was 3 years ago with the passing of my yellow lab Coco that I decided to go back to a German Shorthaired Pointer. My full intent was to reenact those quail hunting moments with my dad, and to live them with my sons for the first time.

This time with the help of the internet I picked the first puppy I could find, my only criteria being the dog needed to be predominately white. No more loosing my dog in the mesquite brush of south Texas. In finding the puppy, I also found the trainer, and it was at his suggestion I began the field trial game. He said, "You should try a field trial, besides it's a good way to extend the hunting season." And though I had always wanted a field champion, my beginnings in the game of field trials was truly with the intent to warm my dog up before hunting season, and make it last into the spring after.

One weekend into it, one score card with all 10's and I was hooked. But there is a lot to learn. There are terms veteran field trailers and pro handlers take for granted.  I hope to use this blog to answer questions, explain the game, and encourage others to get their pointing dogs out doing what they were bred to do.
Posted by jeffyuna at 8:42 AM